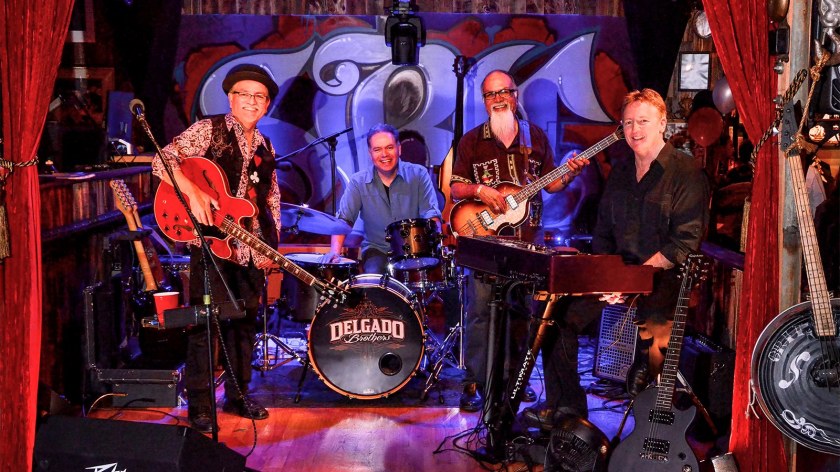 Though they came out of the same East L.A. scene as Los Lobos and El Chicano, the Delgado Brothers — frontman Joe, bassist Bob, and drummer Steve with keyboard player Billy Steinway — forsake Hispanic inspiration for the most part, relying instead on blues/R&B and sweet vocal harmonies. Signed to the Hightone label, the group worked with producers Bruce Bromberg and Dennis Walker (Robert Cray), and released The Delgado Brothers in 1987.

After laying low in the first part of the ’90s, the Delgado Brothers re-formed at the urging of John “Juke” Logan. Percussionist Ray Solis was added to round out their Latin beat and R&B mix. “Let’s Get Back” on the Mocombo label brought the Delgados back to the fold, where they continue to play up and down the West Coast.

Always original and intensely prepared, these journeyman musicians fully infuse all of their song crafting talent with a sense of urgency and an authentic emotional aspect that rings true with intelligence and depth. Tug on the Delgado Brothers musical roots and you’ll find big brother Bob’s bass-playing days tied into the East Los Angeles band, Thee Exotics circa 1960’s. Yet another brother, Eddie played with Thee Ambertones during the same period. Creating a perfect musical environment, for younger brothers Steve and Joey only to aspire to.